After the race was red flagged with twelve laps to go because of torrential rain the race was eventually re-started as a twelve lap wet race with the starting grid reflecting the finishing order at the end of lap fourteen of the red-flagged first race. This left Andrea Dovizioso (Ducati Team)on pole followed by Danilo Petrucci ((Octo Pramac Yakhnich) and Valentino Rossi (Movistar Yamaha MotoGP).

Dovizioso initially led from the start but was soon overtaken by Rossi. But, in trying to keep up with Rossi Dovizioso fell in the treacherous conditions and was soon followed by Rossi who fell a lap later. This left Marc Marquez (Repsol Honda Team) in the lead followed by Jack Miller (Estrella Galicia 0,0 Marc VDS).

Miller passed Marquez on lap four and maintained a comfortable lead until the chequered flag to register his maiden MotoGP win. Miller is the first non-factory rider to win a MotoGP race since Toni Elias beat Valentino Rossi In the 2006 Portugese GP.

In a race cut short because of rain Takaaki Nakagami (IDEMITSU Honda Team Asia) took his first career Moto2 win which saw him take the lead on lap nine and control the race to the end. In second place after a slow start to the race was Johann Zarco (Ajo Motorsport) with Franco Morbidelli (Estrella Galicia 0,0 Marc VDS).

In an exciting race which saw the first four riders cross the finish line less than 0.1 second apart a historic victory went to Francesco Bagnaia (ASPAR Mahindra Team Moto3) for his maiden Moto3 win and the first ever win for Mahindra.

Championship leader Brad Binder (Red Bull Ajo KTM) finished thirteenth after running off track with seven laps to go when saving a near high-side whilst in the leading group. 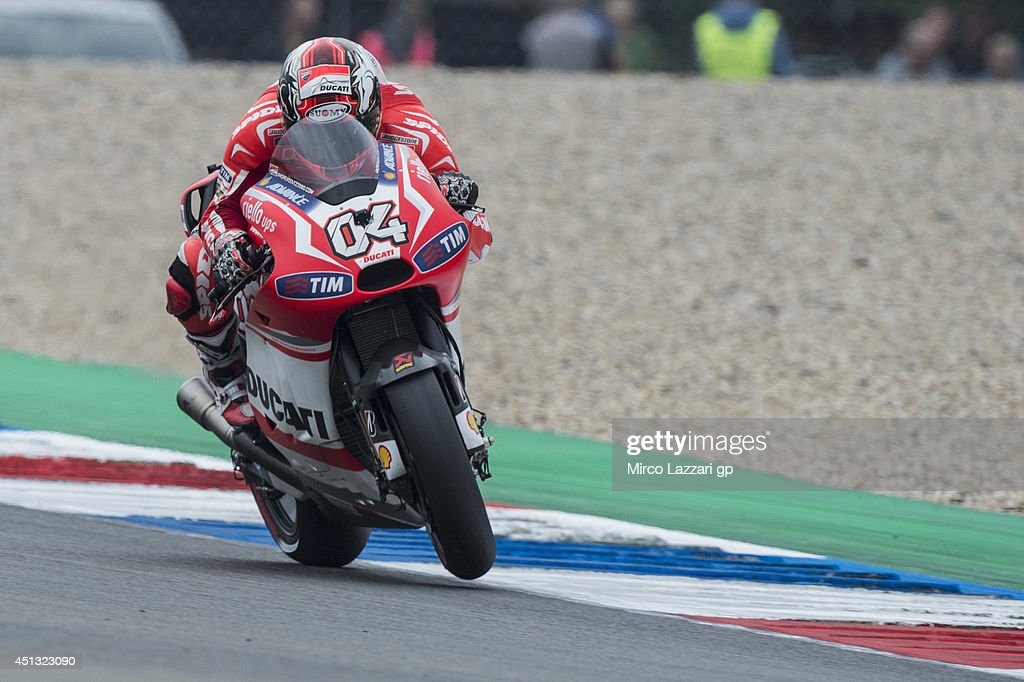 On a wet track with a drying race line pole went to Andrea Dovizioso (Ducati Team), his first of the season and his fourth overall in the premier class. In second place on the starting grid will be Valentino Rossi (Monster Yamaha MotoGP) with Scott Reading (OCTO Pramac Yakhnich Ducati) third, his first premier class front row start.

While being the ninth fastest qualifier Andrea Iannone (Ducati Team) will start from the rear of the grid after being penalised for a collision with Jorge Lorenzo (Movistar Yamaha MotoGP) in Catalunya. Lorenzo managed to qualify in a lowly eleventh position.

Marc – not having fun in Qualifying. (Image from Gold & Goose)

On a track dry enough to use slicks Thomas Luthi (Garage Plus Interwetten) timed things perfectly to produce his pole winning lap just before the rain returned. In second place will be Johann Zarco (Ajo Motorsport) with Dominique Aegerter ( CarXpert Interwetten) third.

Less than one second covered the top twenty riders. 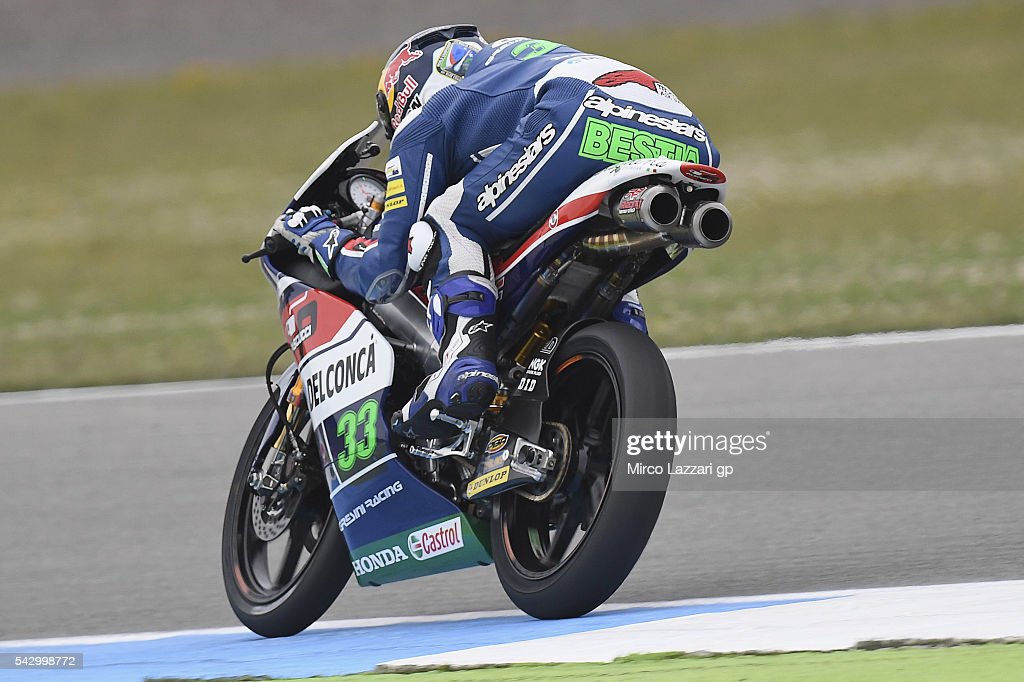 Back end of top pole man Enea Bastininni in Moto3 qualifying. Is this what we’ll see in the race? (Image from getty images)

Starting from fifth on the grid Valentino Rossi (Movistar Yamaha MotoGP) took the race lead on lap seven and, apart from losing the lead briefly to Marc Marquez (Repsol Honda Team) a few laps from the end, rode the perfect race to win from Marquez in second. Third place went to Dani Pedrosa (Repsol Honda Team) for his second podium of the year.

Jorge Lorenzo (Movistar Yamaha MotoGP) led the race until lap seven and then gradually dropped back to fifth place until lap seventeen when he was brought down by Andrea iannone(Ducati Team) who braked too late going into Turn ten and crashed into Lorenzo bringing both riders down. Race Direction has penalised Iannone for the crash by making him start the next race from the back of the starting grid.

Thomas Luthi had an excellent start and led into Turn one but was soon overtaken by both Alex Rins and Johann Zarco and both Rins and Zarco proceeded to draw away from the rest of the field. Rins continued to lead from Zarco until lap seventeen when Zarco made his move and passed Rins and gradually opened up a lead to win the race by over 4 seconds from Rins in second.

The race for the final spot on the podium was very tight and saw Takaaki Nakagami and Hafizh Syahrin pass Thomas Luthi late in the race with Nakagami claiming third , Syahrin fourth with Luthi fifth. Championship leader coming into the race, Sam Lowes finished sixth, thus losing the Championship lead to Alex Rins

In another exciting Moto3 race in which eight riders fought for the lead throughout the race victory finally went to Jorge Navarro (Estrella Galicia 0,0), his first Moto3 win. Second place went to Brad Binder (Red Bull KTM Ajo) who’s podium chances were dealt a blow five laps from the end when he collided with Gabriel Rodrigo, both running wide. But Binder recovered brilliantly to take second place ahead of Enea Bastianini (Gresini Racing Moto3) in third. 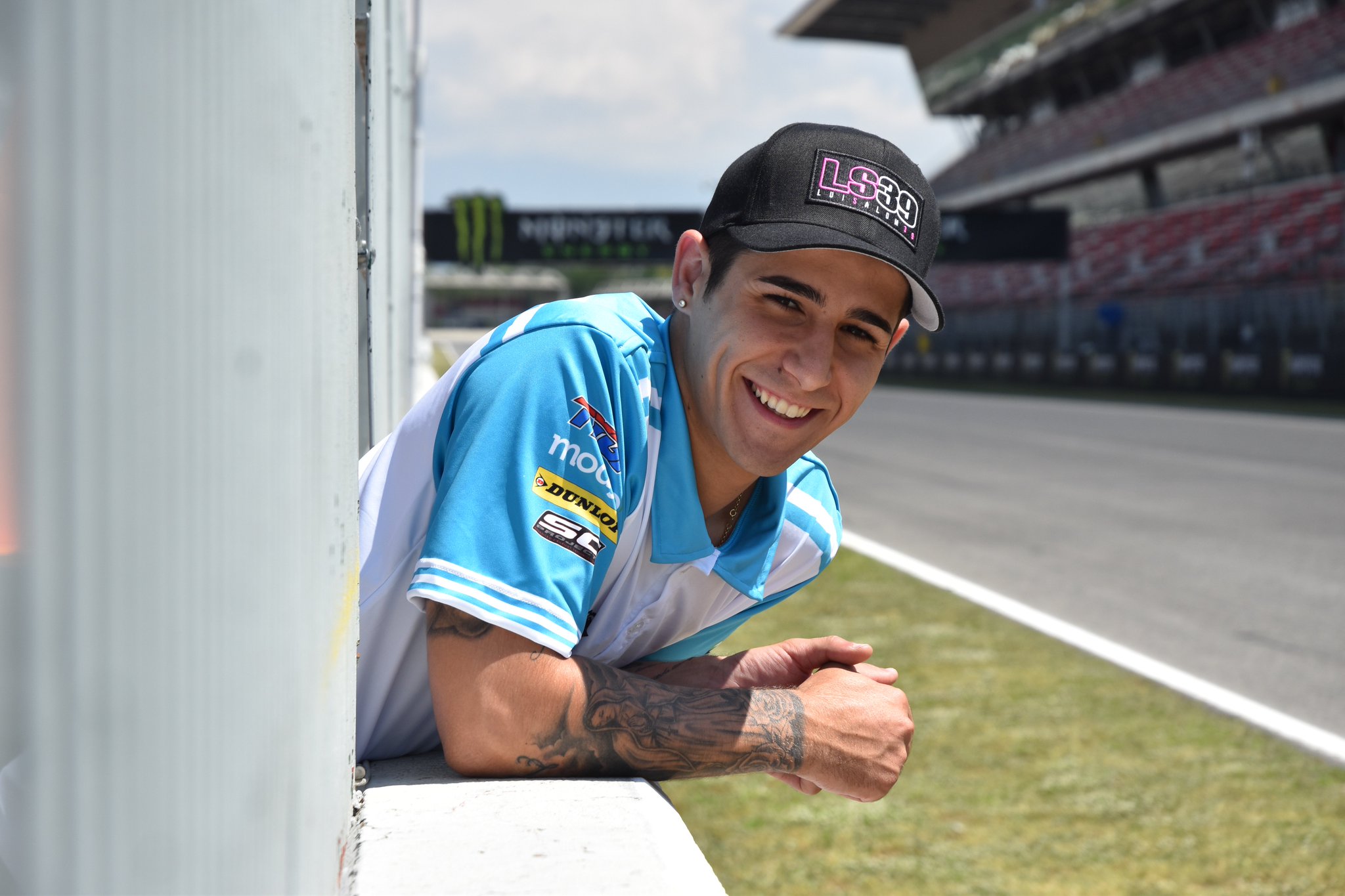 THE DEATH OF LUIS SALOM – Spanish Moto2 rider Luis Salom  died following an crash at turn twelve during  Friday’s Moto2 free practice two session at Barcelona’s Montmelò circuit. He was taken to hospital, but died despite the best efforts of the medical staff.

Because of Salom’s crash the racing will now be held on the F1 configured Catalunya circuit which has chicanes in the turn twelve area.

Reigning Moto2 World Champion Johann Zarco (Ajo Motorsport) took his first pole position of the season and his second successive pole at the Catalan circuit. In second place was Alex Rinns (Paginas Amarillas HP 40), the only Spanish rider in the top five, with Thomas Luthi (Garage Plus Interwetten ) third.

Jorge Lorenzo (Movistar Yamaha MotoGP) won an exciting race after firstly holding off the challenge of Valentino Rossi (Movistar Yamaha MotoGP) for the first eight laps until Rossi’s engine blew up causing his retirement this being followed by a determined effort by Marc Marquez (Repsol Honda Team) which saw him take the lead on the last lap and looked like winning the race until he was passed by Lorenzo just before the finish line.

There was also a tight battle for third place between Andrea Iannone (Ducati Team), who had a poor front row start and eventually worked his way through the field to pass both Dani Pedrosa ( Repsol Honda Team) and Andrea Dovizioso (Ducati Team) to finish on the podium in third place. Fourth place went to Dani Pedrosa with Dovizioso fifth and Maverick Vinales (Team SUZUKI ECSTAR), who also had a poor start from the front row of the starting grid, in sixth place.

In a race shortened to 10 laps because the first race was red flagged as the result of damage to an air fence after an incident between Alex Marquez (Estrella Galicia 0,0 Marc VDS) and Luca Marini (Forward Racing), Johann Zarco (Ajo Motorsport) eventually claimed victory after a titanic struggle with Lorenzo Baldassarri (Forward Team)who finished second.

In an incredible race where any one of at least five riders could have won victory finally went to Brad Binder (Red Bull KTM Ajo) who showed superior race craft to win a race where the top five finishers were separated by 0.077 sec. Second place went to rookie Fabio Di Giannatonio (Gresini Racing Moto3) with the last podium position going to Francesco Bagnaia (ASPAR Mahindra Team Moto3).

Binder’s main Moto3 title rivals Romano Fenati ((SKY Racing Team VR46) and Jorge Navarro ((Estrella Galicia 0,0) who were in the leading group failed to finish the race. Fenati’s chain broke on lap ten and Navarro crashing out on lap twelve after coming into contact with another rider. 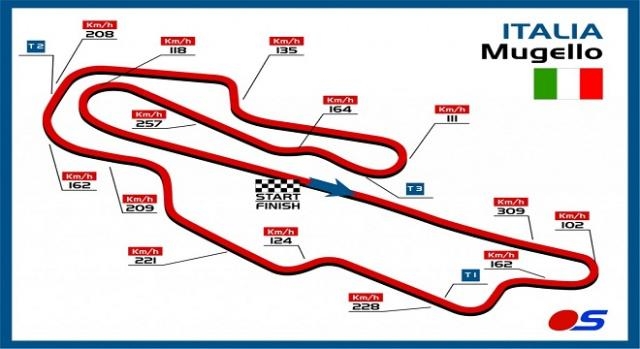 Andrea Iannone (Ducati Team), who had been fastest all through practice,  held provisional pole right to the final stages of Q2 when he was overtaken firstly by Valentino Rossi (Movistar Yamaha MotoGP) who took his first Mugello pole since 2008 and then by Maverick Vinales (Team SUZUKI ECSTAR) leaving Iannone in third spot on the front row of the starting grid.

Sam Lowes (Federal Oil Gresini Moto2) took his third pole position of the season, the only rider to get into the 1’51s during the session. In second spot was Takaaki Nakagami (IDEMITSU Honda Team Asia), his first front row start since 2014 with Lorenzo Baldassarri (Forward Team ) taking the last place on the front row of the starting grid in third, his first in Moto2. He was due to start from the front row in Le mans but was demoted because of a technical infringement.

Pole position went to Romano Fenati(SKY Racing Team VR46), the third of his career and his first in Mugello.  Second spot was initially given to Francesco Bagnaia (ASPAR Mahindra Team) but his time was cancelled because he exceeded track limits at Turn 5 resulting in his starting from eighth place with Andrea Migno (SKY Racing Team VR46) being elevated to second place and Khairul Idham Pawi (Honda Team Asia) third.

In a race dominated by crashes Jorge Lorenzo (Movistar Yamaha MotoGP) ran away with the race leading from start to finish. Behind Lorenzo major podium contenders fell one by one, the first being Andrea Iannone (Ducati Team) who fell on lap 7 while holding second place.

Then on lap 16 after being passed by Valentino Rossi (Movistar Yamaha MotoGP) for second place but still battling with Rossi for the spot both Andrea Dovizioso (Ducati Team) and Marc Marquez (Repsol Honda Team) had simultaneous crashes in turn 7, both losing the front end at the same time. This left Rossi in a lonely second spot and promoted Maverick Vinales (Team SUZUKI ECSTAR) to third place for his first podium finish in MotoGP.

With an excellent ride Alex Rins (Paginas Amarillas HP 40) took his second win of the season after a race long battle with Simone Corsi (Speed Up Racing) who was just unable to get past Rins and eventually settled for second place. Third Place went to pole sitter Thomas Luthi (Garage Plus Interwetten) who faded during the middle part of the race but recovered to gain the last podium spot.

In fourth spot was Navarro’s team mate and Moto3 rookie Aron Canet (Estrella Galicia 0,0) who just lost contact with the leading trio during the final stages of the race but finished well ahead of Nicolo Bulega (SKY Racing Team VR46) in fifth with local hero Fabio Quartararo (Leopard Racing)  sixth.

Jorge Lorenzo (Movistar Yamaha MotoGP) took pole with the fastest ever MotoGP lap of the Le Mans circuit. Second place on the starting grid went to Championship leader Marc Marquez (Repsol Honda Team) with Andrea Iannone (Ducati Team) taking the final front row spot even though he crashed with under 4 minutes to go of Q2.

Pole position went to Thomas Luthi (Garage Plus Interwetten) with a new Moto2 lap record for the Le Mans circuit. In second place was Alex Rins (Paginas Amarillas HP 40) with Simone Corsi (Speed Up Racing) third. Lorenzo Baldassarri (Forward Team) was due to start on the front row but was demoted to seventh place for a technical infringement.

By tipster Uncategorized No Comments
Love0